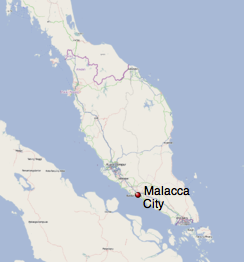 Melaka (or Malacca) is a former Portuguese, Dutch and British colonyin the southern part of the Malay peninsula, just a few hours by bus from Singapore. The bus journey wasn't particularly interesting, unless you were really into palm oil plantations. Like really into palm oil plantations. I had the bus to myself though, so I chilled out and caught up with some podcasts I'd been meaning to listen to.

Shortly after checking into my hostel, a group of us cycled along the Melaka River to a hawker centre where all manner of amazing Malaysian food could be had for around 5 Ringgits (I call them Ringos) - which is around £1. The paths that line the riverbanks are beautifully lit up at night, and it's so peaceful you forget you're in a bustling city of half a million people.

Next day, I woke up late and went out to do my usual wander. On my way out the Hostel owner told me to come back in a couple of hours for a book launch - "Free food" he said. Fair 'nuff. I went out to Kampung Morten and took some pics in the meantime. 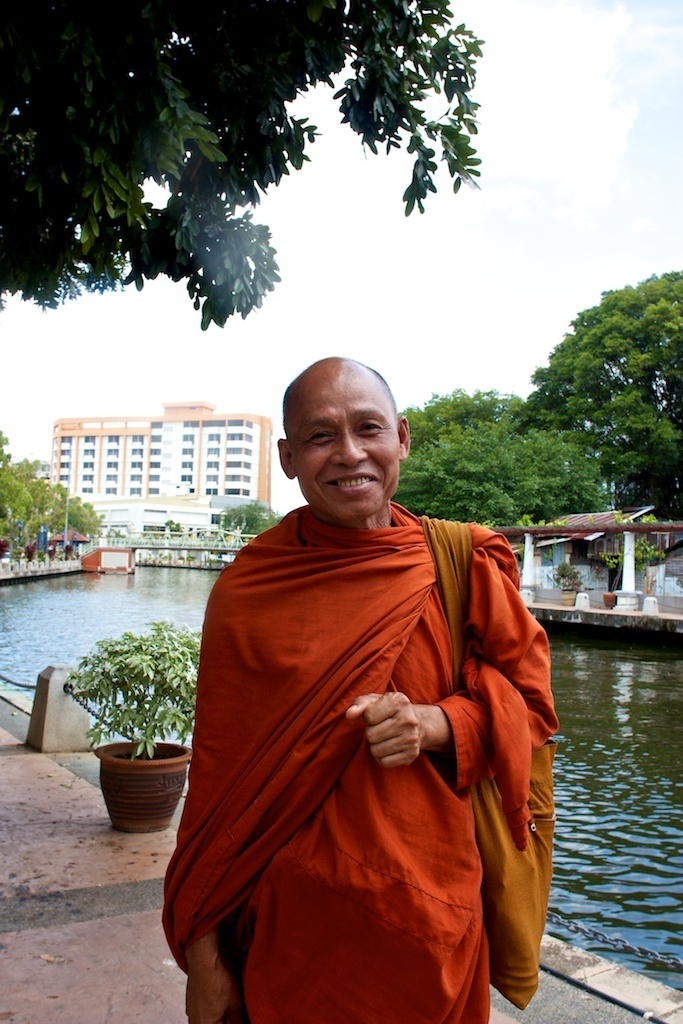 The book launch was...weird. Apparently the local author Bonny Wee had penned "Melaka: A World Heritage City 2012" (apparently a sequel to "Melaka: A World Heritage Site 2009") and was keen to launch it with some fanfare so the courtyard where we were sat was bustling with press, locals in traditional dress, and confused foreign tourists who'd been ushered in by smiling Malays wearing "I love Melaka!" t-shirts and promising free food. Nothing, as we were to soon find out, is ever free. 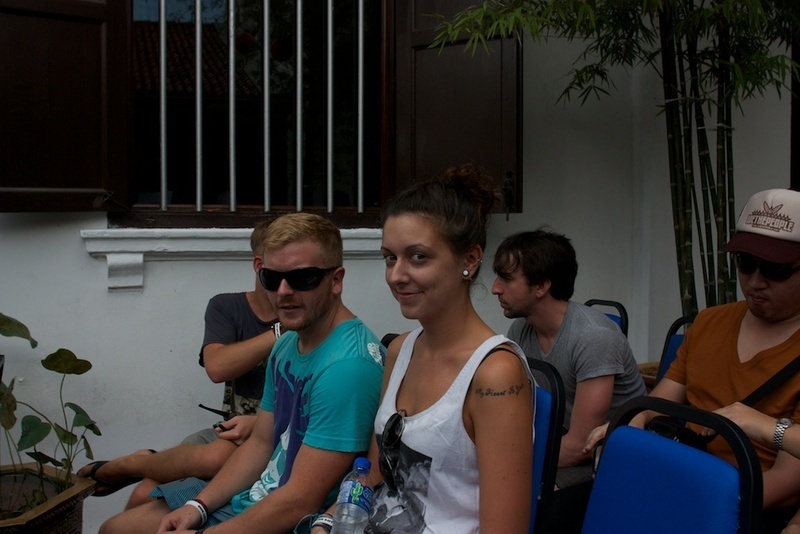 The ceremony was long and protracted, the main speaker (some kind of government official for Melaka state) waffled on for a couple of hours about the area and really pushed the book like his life depended on it. At one point he was talking about how fat people in Malaysia are (note: people in Malaysia are not fat), and how he was slim to make an example for everyone else (note: he is not slim). He then talked about the Melakan food, and suggested that you really shouldn't need to buy the book as the author had already been bribed by local restauranteurs to big them up. I thought he might be drunk, or at the very least slightly mental. 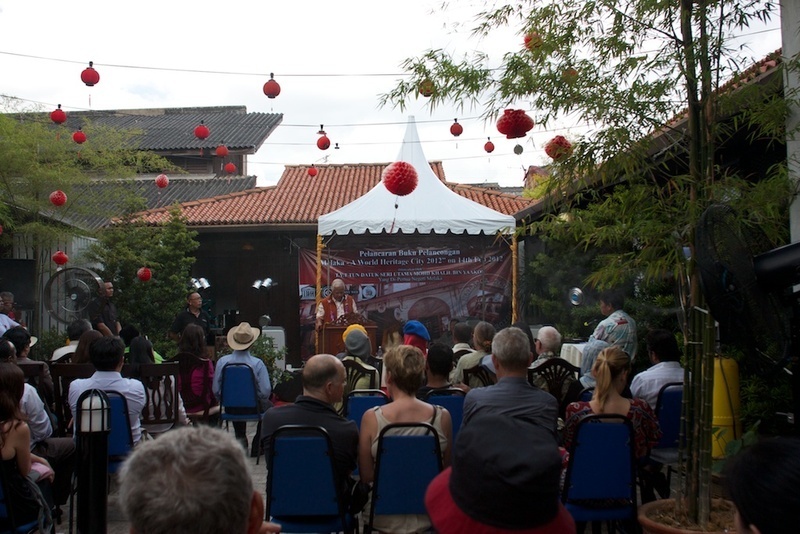 At the end of the speech a big bang occurred (firework, perhaps?) and the Indiana Jones theme kicked in through the PA system. A guy in a cowboy hat emerged from a fake well carrying a box, inside the box were some faux antiques and the book. It was pretty surreal, but the press were lapping it up. 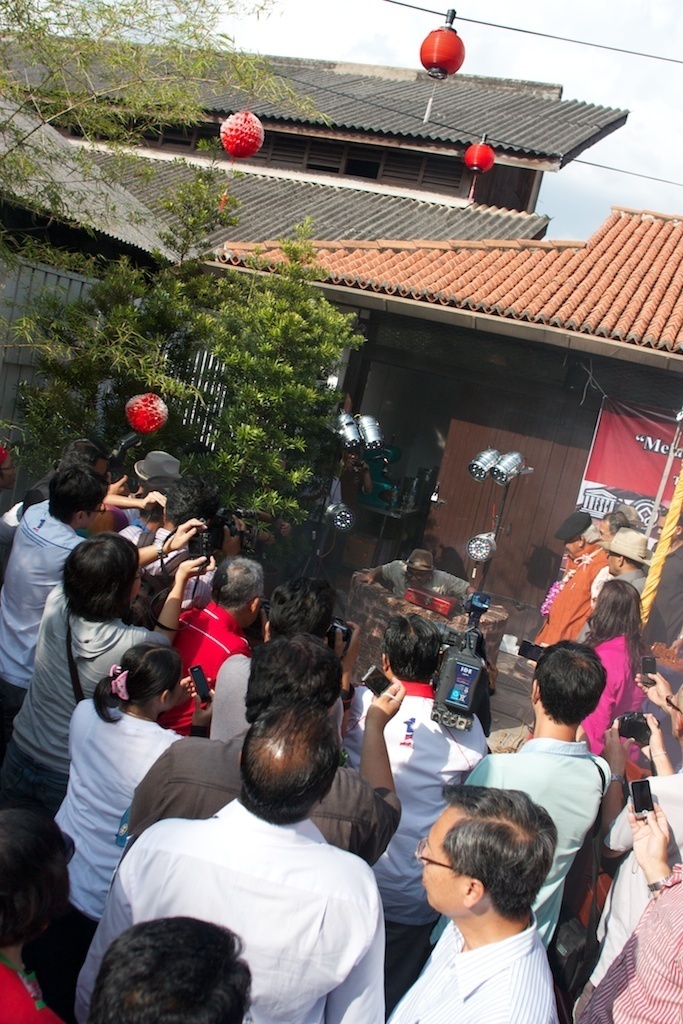 Still, I got a chicken thing shaped like a love heart which was nice - it being Valentine's Day and all. 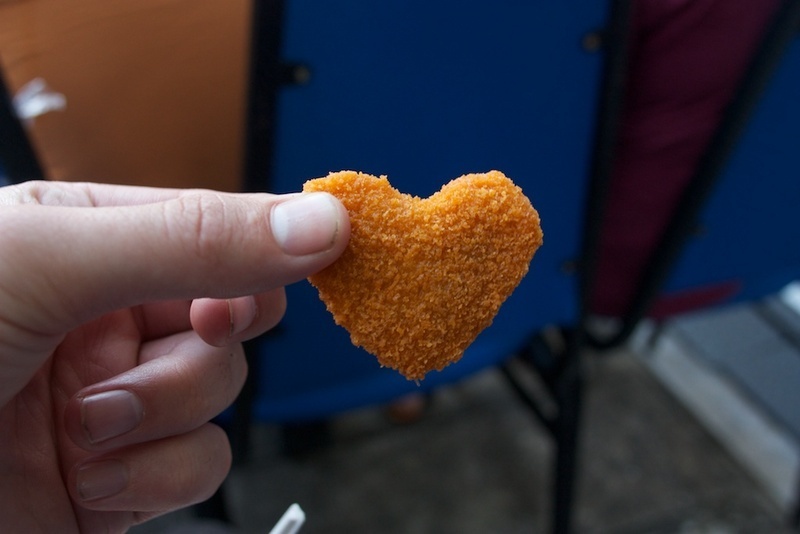 Next day I went wandering again, down to where the Melaka River meets the sea. I saw a fisherman who managed to net a decent amount of mud but no fish. Right by where he was fishing was a shrine of some kind, flanked on either side by bottles of yellowing water. 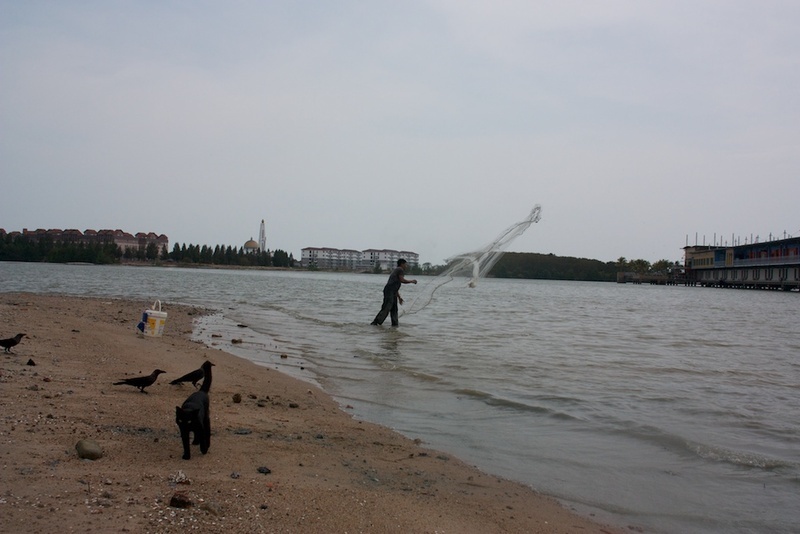 Back in town there was a photography exhibition I checked out, which had a balcony with a nice view of the main square. 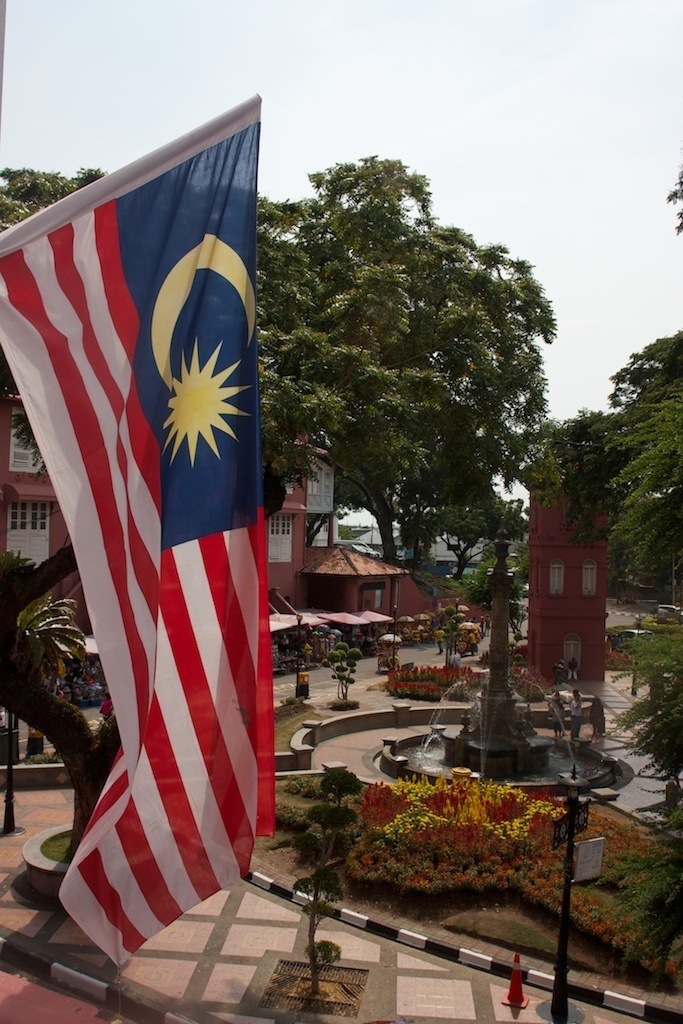 Outside there was a lady on a moped necking a bottle of Vodka. 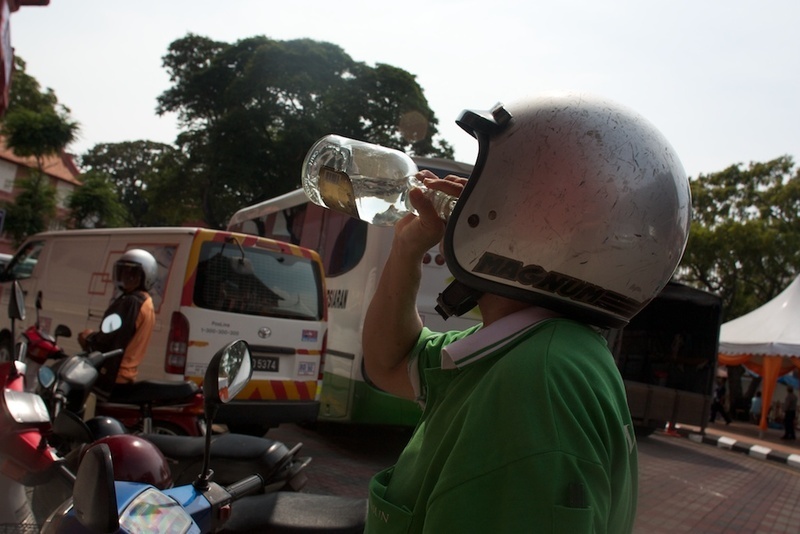 In Chinatown I found a decaying house and had a wee nosey around. I've no idea what happened, it was far grander than any of the buildings around it. 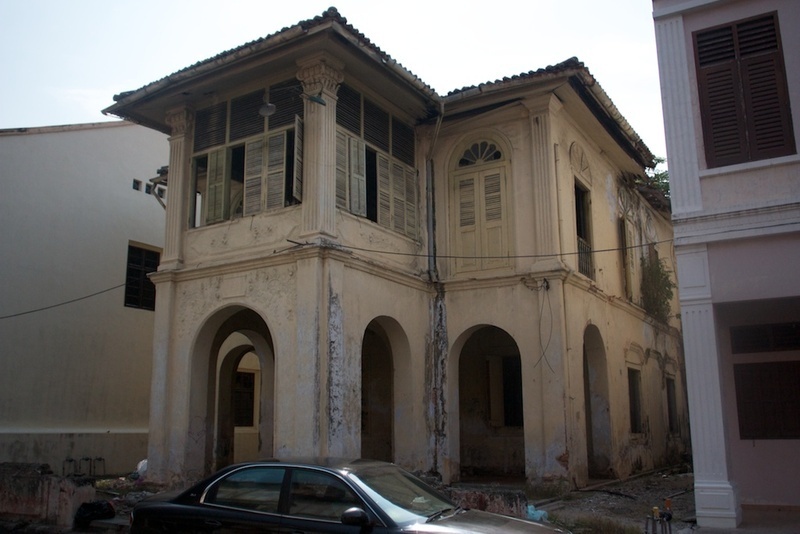 That night I went to another Hawker Centre for dinner. They're basically just covered areas where a number of vendors sell different kinds of freshly made food and it's dirt cheap. Sometimes there's people on hand to bring you beer, too. I had Laksa Nyonya, a spicy noodle soup. 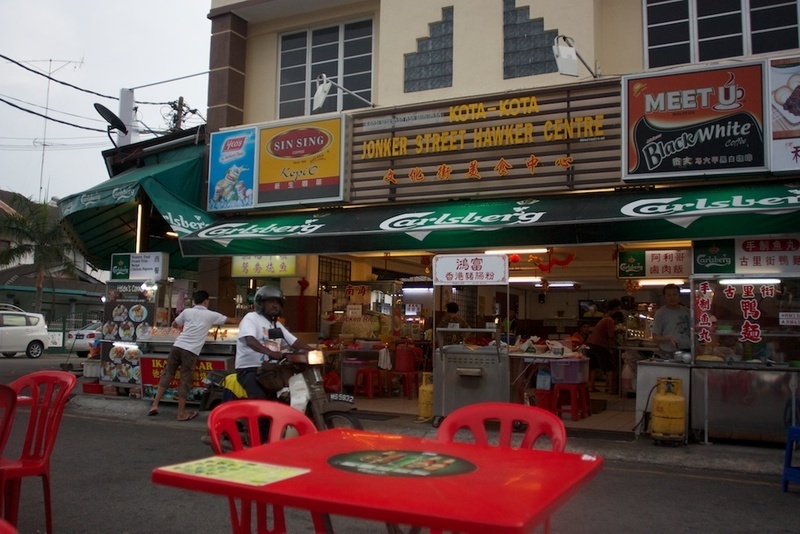 And on the way home some long exposures for fun 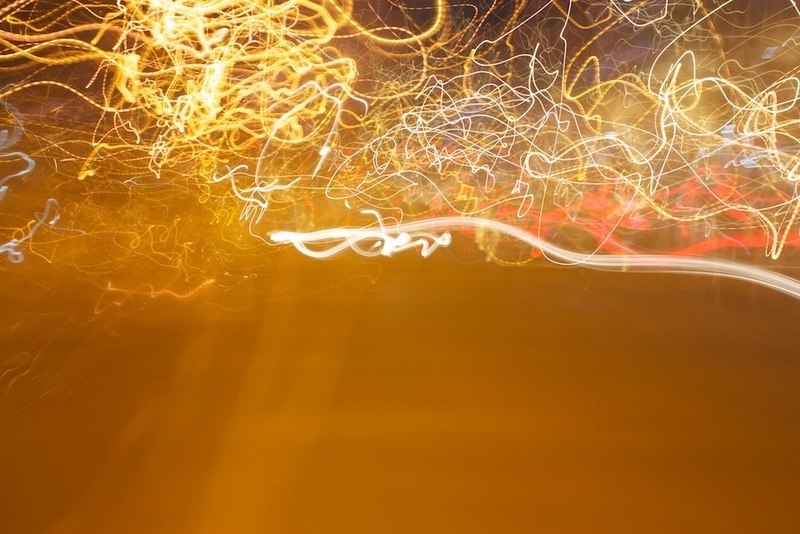